Grab your sneakers and take a walk…on National Walking Day.  According to the American Heart Association, the event is celebrated on April 1st, but some sources say it’s celebrated on the first Wednesday in April.  We at KMM think regardless of what day it falls on, everyone should walk!

By committing to walking at least 30 minutes, you can get healthier and raise awareness about the importance of physical activity. On this day, millions of people throughout the United States will come together to take steps to live a healthier life for themselves, their families and their communities. You can celebrate the day in the workplace, at schools, in neighborhood walking groups and clubs and communities.

Here are 3 tips on how to participate in National Walking Day, today and really, all year long. 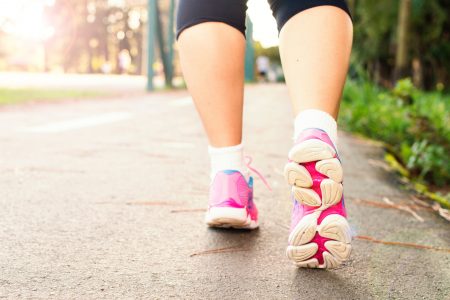 Form a walking group with your neighbors.  Commit to meeting 3-5 times a week and walk different routes in your neighborhood.  Not only are you getting exercise, but you are engaging within the community.

Plan a walking meeting.  Sometimes the best ideas come when you are exercising.  Instead of sitting around the table, have a staff meeting walking at lunch with your coworkers.  While it’s a more informal type of meeting, it could produce some unique ideas.

Create a walking challenge.    Whether with your neighbors, co-workers or people in your community, create a challenge to see who can walk the most steps in one month.  Determine a monetary amount to join and split the total money collected between the winner and a local charity or cause in your group’s name.  With so many apps and devices, you can track each other’s progress.

So lace up those sneakers and get out there and walk for your community and for your health.   Oh and remember to:

obey the rules of the road

…and most importantly, don’t text and walk. 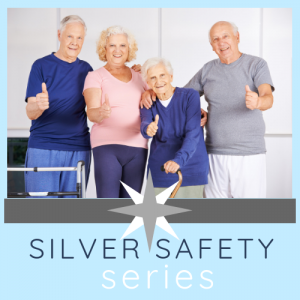 KMM is excited to announce the launch of our new program for active adults called – Silver Safety Series. The program provides a number of interactive presentations that deal with driving safety, pedestrian issues, on-demand transportation alternatives, and even health and exercise. This program can be presented individually or as series and features interactive presentations, light refreshments, and giveaways.

Available to senior centers across Middlesex County, the program is FREE and can even be customized to each facility. Listed below are the options.  Again, a senior center can pick and choose which of the presentations they would like to offer and schedule them for a 1/2 day or as a series.  To learn more, or to schedule the Silver Safety Series, call our office (732-745-4465).

Hiking is a great outdoor activity delivering benefits beyond scenic and fun. Unlike regular walking, hiking involves much more. Here are some safety tips to cover before you go out for your hike. 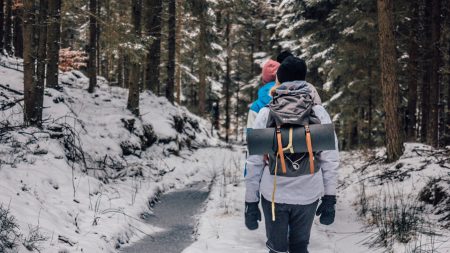 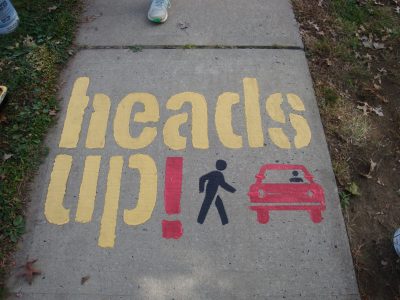 Distracted Walking is a growing problem all over the world. Each year, more and more people are injured while walking because of texting, talking or listening to music while on their cell phones. According to the Governors Highway Safety Association, there were nearly 6,000 pedestrian fatalities in 2017 as a result of distracted walking. How do we stop this number from growing?

Not looking ahead of you can cause you to trip, fall, or even end up in the hospital with serious injuries. Staying aware of your surroundings, big or small, inside or outside, can help prevent accidents from occurring.

Many pedestrians are losing focus on things happening around them and are putting their safety as well as the safety of others at risk because of being on their cell phones. Too many pedestrians rely on cars stopping for them, which causes the number of cell phone use while walking to go up. It is wrong for pedestrians to assume that motorists will always hear and see them. Too many times motorists are not aware of pedestrians approaching and before anyone realizes, it could be too late.

The simple solution is for pedestrians to stop using phones while walking, anytime – anywhere!  Did you know over half of the distracted walking injuries occur in our own homes?  We need to stay aware of our surroundings at all times.

Don’t become another statistic, instead, put your phone down and keep your head up!

They say your life passes before your eyes just before you die.  I don’t know if that’s true but a close call on May 27 made me realize I‘m not eager to find out.

Walking back from lunch, I stopped at a 3 way intersection about a block from KMM.  There are 3 stop signs and a speed limit of 25 MPH.  Signage reminds drivers to stop for pedestrians who are crossing the one way street.  On this bright, sunny day, there were no vehicles in the intersection and none approaching. I looked left then right, and feeling it was  safe, I stepped off of the curb and began to cross.

Suddenly, from the corner of my eye, I noticed a SUV barreling toward me.  Speeding closer and closer, the vehicle showed no signs of slowing down let alone stopping.  It was going to hit me. With seconds to spare, I rushed back to the sidewalk. I focused my eyes on the driver, a well-dressed 60-ish man.  A woman was in the passenger seat.  The couple appeared to be arguing and looking at each other, not the street.

In the panic stricken moments that followed, I realized I was lucky to be alive, but was too stunned to scream, “you almost killed me!”  Bill Neary, my colleague, witnessed the incident, and did the yelling for me. But, it didn’t matter.  The SUV was long gone and the driver totally unaware of the near miss.

Back in my office, I sat silently, taking deep breaths, and replaying the entire incident in my mind.  I asked myself, “how did this happen?”

As a transportation specialist involved with traffic safety issues, I mentally reviewed the 3 Es of traffic management — Engineering, Enforcement and Education.  The engineering and enforcement aspects including road design, pavement markings, speed limit and stop signs to control traffic were all present.  The missing element was education.

Anyone who sits behind the wheel must respect the rules of the road and understand the risks and dangers of driving.  Drivers must stay ALERT and pay attention to roadway conditions, speed limits and traffic signs. A driver under the influence of drugs or alcohol, or who is experiencing rage, anger, or other distractions should not drive until he or she is back to normal, especially in a downtown setting with many pedestrians walking around during the lunch hour.

This incident made me I realize that I am not only responsible for my own behavior and safety but, I must also be mindful of the improper driving behaviors of others. It reminded me that life is so unpredictable and that we should never take it for granted.  You never know if you can go back home.

In the last year of her life, my Mom was slowed by age and illness.  Mobility issues forced her to use a walker to get around.  Mom traded in her driver’s licenses for a Handicapped placard which she could transfer to any vehicle in which she was a passenger.  She knew where the handicapped spaces were located at the places she frequented.  It irked her to discover vehicles without special placards or license plates parked in them.    She didn’t like to be “dropped off” while her companion hunted for a space. It was a major production which she found embarrassing. Get out of the car, retrieve the walker from the backseat, open it up, help Mom out of the car, get her situated, and wait to make sure she entered the establishment without incident.   Sometimes, when she saw an able-bodied person saunter to the vehicle he or she parked in a handicapped spot, Mom speak up,

“You shouldn’t be parking there. This is for handicapped people.”

“I was only running in for a minute,” the driver replied.

“Be thankful, you can run,” was her sharp retort.

In NJ, over 50,000 license plates and 460,000 placards have been issued to persons with certain handicaps. A list of the criteria for these permits and an application may be found at www.state.nj.us/mvc/Vehicle/handicapped_qualifications.htm.

Those who park in handicapped spaces without a license plate or placard are subject to fines and repeat offenders may be required to serve 90 days community service.  The NJ Legislature is considering a bill that cracks down on motorists who unlawfully use a temporary or permanent handicapped parking placard.  If Assemblymen Reed Gusciora, John Burzichelli, and Troy Singleton have their way, violators would face fines of up to $500.

It’s too bad we need this law.  Handicapped spaces are the ultimate “preferred” parking, located conveniently near the entrance to the market, library, restaurant, or movies.  But, my Mom would have so “preferred” to walk across a parking lot with a sprightly, confident gait.  She would have preferred not to need a walker.  But since she did, she preferred being able to park in a handicapped space.

The other day, I was on the phone with my friend Anna when she screamed, “Stop, Jim, stop!  There’s a stop sign!  Phew! That was close.”

She was a passenger in the car with her 80 something husband who refuses to relinquish the car keys.  Most of the time, she cajoles him into letting her drive but sometimes, especially for trips around town, Jim insists on getting behind the wheel.

Anna knows Jim should not be driving.  She’s tried hiding the car keys.  He made a spare set which he hides from her.  She’s thought of disabling his car.  But, Jim is pretty handy and he’d have it up and running in no time.  She has suggested less stressful routes.  But, Jim knows how to get “there” and doesn’t want to go a “longer” way.

What Anna hasn’t done is talk to Jim.  Her attempts to start a conversation have been rebuffed.  He doesn’t want to discuss it and she doesn’t want to start an argument.  She knows that being dependent on others to get where he wants to go would be devastating.  For Anna and Jim and other husbands and wives and parents and children, it’s hard to have “the talk.”

Healthguide.org, a healthy aging help center, helps readers figure out when the time for “the talk” is right.  Diminished strength, coordination, and flexibility, problems with vision and hearing, reduced range of motion, and forgetfulness may be signs that driving should be curtailed.  If a driver has a few “close calls” like hitting the mailbox or begins receiving tickets or citations, or is driving erratically – too fast, no signals, sudden lane changes, it’s time.

It’s important to cover all the bases first.  If hearing or vision is a problem, will a hearing aid or new glasses help?  Can the manual transmission vehicle be replaced with one with an automatic transmission, power steering, and power brakes?  Are there slower roads?  Can driving be done only in daylight?  Is a senior driver refresher course available?  Sometimes, solutions like these can extend a person’s driving time.

But, if adjustments can’t be made, it is time for “the talk.”  The conversation should be respectful and helpful.  Emphasize safety, not only of the driver but of others on the road.  If possible identify options – public transit, senior shuttles, taxis, ridesharing or family, friends, and neighbors who would be willing to help out with transportation needs.

Anna is working up to “the talk.”  She’s spoken to Jim’s doctor and is trying to find a professional who can evaluate Jim’s driving behavior.  She’s going to bring in family members to reassure Jim of their support.  They all love Jim and want him to stay active and involved.  They just don’t want him driving.